The Screenwriting Master Class mentored by Golan Ramraz kicked off on February 29th. The extra day of this year marked the beginning of the next batch of aspiring filmmakers who have joined the Nu Boyana Film Community. 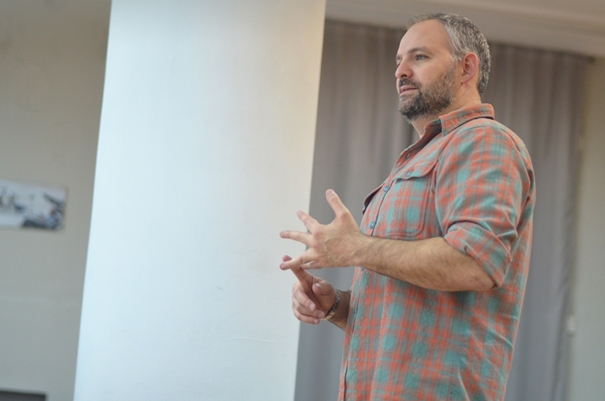 Eager faces entered the classroom looking forward to meet their mentor. There were some familiar faces from last year coming back for more wisdom and knowledge to gain from Golan Ramraz. The Hollywood screenwriter and producer welcomed all 33 new students with a brief introduction and dove right in the learning process.

Each participant took the spotlight to say a few words about themselves. The versatile background of the students posts an intriguing start of the class. Each of them will have the opportunity to complete one short film and one feature film script. With professional musicians, writers, ambitious moviemakers and a priest, being part of the class, the stories this year will definitely be something to look forward to.

The initial reactions of the group to Golan’s first lesson were contrasting and a little shy. As time progressed more voices started to emerge and express their opinion. Deconstructing favorite movies got people excited to the point of cordial arguments. This is what movie magic is all about – heroes, villains and stories that touch your heart so deeply you feel them as something extremely personal.

Golan’s manner of teaching evoked new levels of appreciating and understanding movies. These discussions marked the beginning of their journey as protagonists in the Nu Boyana Film School story.

We are looking forward to observe our heroes change and create their own worlds in the next eight weeks.