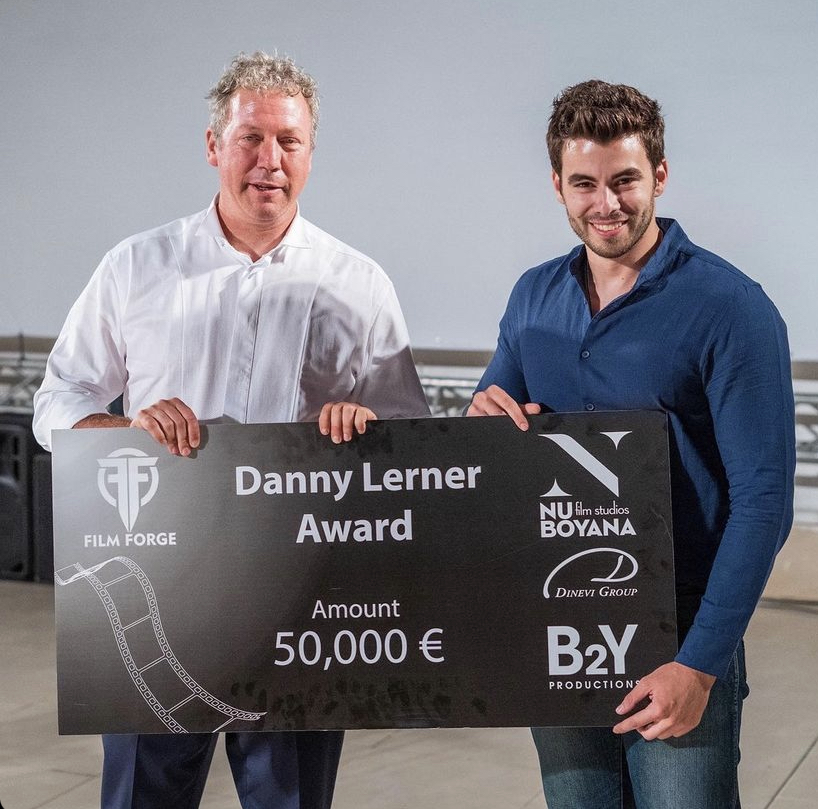 Last week, talented directors, writers, and producers from all over the world submitted their scripts for a short film or proof of concept to take part in the Danny Lerner Film Fund Award where the winner is awarded the grand prize €50000 in services from Nu Boyana Film Studios.

This year a young up-and-coming director, Alexander Manolides from Athens, Greece was awarded the check for his screenplay «Daughters of Ares» by Yariv Lerner (CEO of NuBoyana) accompanied by the guest of honour, Martin Campbell, at the Sveti Vlas Film Festival.

We sat down with Alexander to speak about his experience.

“It was just surreal. And when it did happen, it took me a few seconds to realize that it had happened. They had to push me to go up there”, says Alex with a smile.

What is the idea behind your script? Share with us.

Well, the general idea surrounds the ancient tribes of the Scythians and the Amazons. And for the short, it’s their first interaction a few years after the Attic War, when the Amazons, the Scythians and several other tribes of the East went to war with Athenians under the leadership of Theseus. This was around 1200 B.C. and the short is an introduction to the series.

When will you be ready to start your project?

Actually, I am ready to start immediately. I just need to figure out what the logistics are, and what the availability is, as far as Studio is concerned, as far as people who work in it. I mean the crew, the cast, the resources, the locations, but once we find that out we will get started.

What can you tell us about the “Intro to Film” Course with Martin Campbell?

This has been an amazing experience. I’ve been studying Martin Campbell for a while and he was one of three directors who brought me into filmmaking and got me interested in it. Back in early 2000 when I watched my first horror movie as a kid, and then with Casino Royale, which, you know, revolutionized the pretty old franchise and set the bar pretty high. And I’ve been referring back to those movies more than most to find out my own journey as far as filmmaking goes. So being with him and listening to his stories from his sets, witnessing him in action has truly been a one-of-a-kind experience.

What would you share with other filmmakers who are looking to make their dreams come true?

I’ve noticed usually no matter how hard something looks, if you keep pushing, eventually it will crack. I’ve been working on this particular project for 5 and half years, almost 6. But I always thought of it as something that would happen eventually, at some point, in the future. And so, with this being the first major step towards achieving it, I would say just have this big goal in your mind and always work towards it. With every step you make, everything you do has to lead to that goal. If you keep pushing, eventually someone will notice.